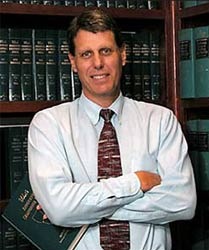 John (“Jack”) Stennett received his Doctorate in Law from U.C. Hastings College of the Law in 1976.  He is a recipient of the Outstanding Trial Lawyer Award from the San Diego Trial Lawyers Association.  Over the last several years Martindale-Hubbell has noted Mr. Stennett AV Preeminent with a 5 out of 5 pier view rating.  And San Diego Magazine has designated Mr. Stennett as a “Top Lawyer.”

Jack Stennett has been litigating ERISA cases since 1989 and personal injury and bad faith cases since receiving his license in 1976.  He has successfully litigated cases against almost every major insurance company in both state and federal courts.  Having played intercollegiate sports (basketball), Mr. Stennett is competitive by nature which shows in his tenacious representation of his clients.

Mr. Stennett grew up in San Diego and has strong ties to the community.  His father was a prominent local attorney (now retired) who counseled his son that the most important traits in successfully representing his clients are hard work, honesty, and attention to detail.  These are the traits Mr. Stennett brings to the table for each of his clients.